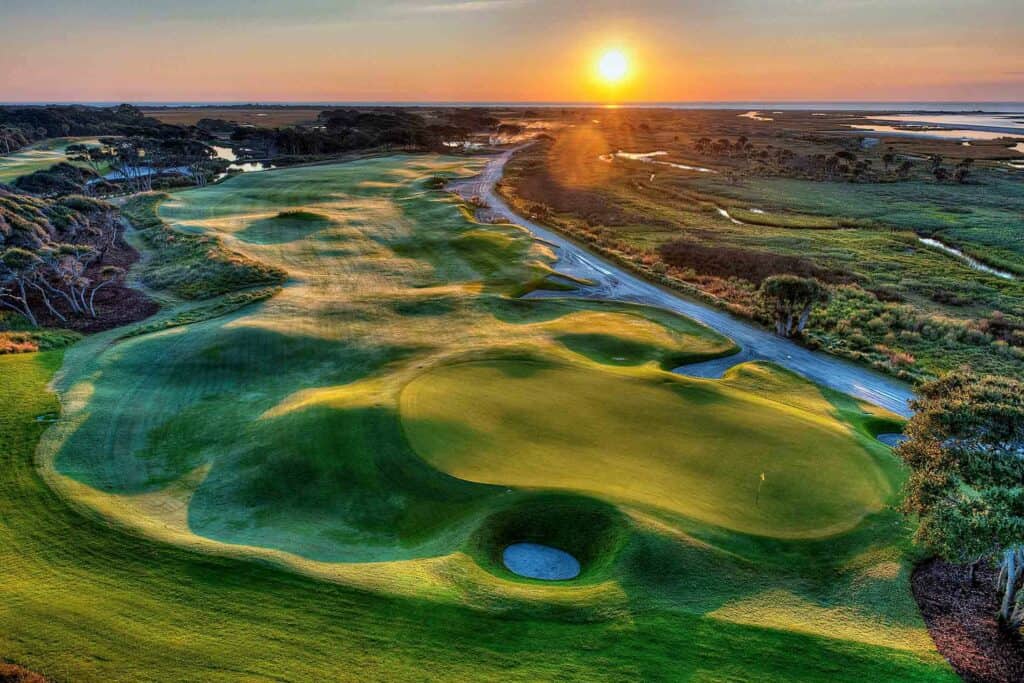 There are 5 world-class golf courses on Kiawah that are open to the public. Each are challenging to play and beautiful to admire. The courses that are open to all Kiawah guests are Oak Point, Cougar Point, Turtle Point, Osprey Point, and the Ocean Course (home of the 2012 and 2021 PGA Championships). The prices vary depending on the time of year and the course that you play.

The Ocean Course is a bona fide masterpiece, though it was cursed in its infancy the same way the Eiffel Tower was maligned when it was constructed. No matter the threat or the bet, don’t even think about playing it from the back tees. You can go back there and have the most miserable day of your life, or you can pick the forward tees and have one of the grandest days you’ve ever enjoyed on a golf course. It’s pretty much up to you.

With all 18 holes offering panoramic views of the Atlantic Ocean, it’s likely The Ocean Course would have earned widespread acclaim had no tournament ever been played there. Located at the Eastern end of Kiawah Island, The Ocean Course negotiates along 2-3/4 miles of pristine oceanfront property. According to Pete Dye, “There’s no other golf course in the Northern Hemisphere that has as many seaside holes.”

No. 4 ranked public golf course in the United States – Golf Digest 2014
Ranked “5 Stars” (one of only 16 courses in the country), “Great Conditioning” & “Great Pace of Play” – Golf Digest.

Turtle Point
Kiawah’s Turtle Point, offers a combination of length and accuracy. This Jack Nicklaus design has led to its selection for several important championships including the Carolinas’ Amateur, the Carolinas’ PGA, the South Carolina Amateur and the 1990 PGA Cup Matches, the club professionals version of the Ryder Cup. Opened in 1981, Turtle Point is a low-profile design with fairways and green settings blended into the existing landscape. Nowhere is this more evident than along a spectacular three-hole stretch woven through rolling sand dunes directly along the Atlantic Ocean. With sparkling renovations completed in 2000, Turtle Point was ranked at 4.5 stars by Golf Digest.

Osprey Point
Osprey Point is a Tom Fazio layout, originally designated a “members only” course, but now it’s open to resort play. It, too, has gone through a facelift. At Osprey Point, Fazio used a superb natural canvas to create a masterpiece in playability and variety. The setting for the course features four large, natural lakes, fingers of saltwater marsh, and dense maritime forests of live oaks, pines, palmettos, and magnolias. Into that backdrop, Fazio blended a par-72 layout that takes advantage of its setting. Ranked in Golf Digest’s “America’s Top 75 Resort Courses,” Osprey Point has grown into one of the favorite courses on the island. Osprey Point was ranked “4 Stars” & “Great Pace of Play” – Golf Digest.

Cougar Point
No course on the island, however, has undergone more changes than Cougar Point, an executive course by Gary Player previously named Marsh Point, that Player happily stretched into a 6,875-yard par 72.

Hey! Curious about Kiawah or our accomodations – feel free to text, email or call! We’re always here to help!