Located 21 miles south of historic Charleston on the South Carolina coast, the island was named for the Kiawah Indians who inhabited the Island up to the 1600s.

The island was deeded to George Raynor in 1699 by the Lords Proprietors. The prominent Vanderhorst family of Charleston kept the Island for 180 years before selling it to C.C. Royal of Aiken in 1950 for hunting and fishing. The Kiawah Island Company Ltd. bought the Island from the Royal family in 1974 and started to develop it into the world-class resort that it is today. 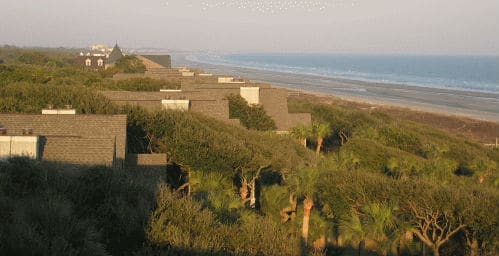 The island is comprised of 10,000 acres. It is roughly 10 miles in length, 1.5 miles at its widest point and is bordered by protective sand dunes. The island consists of marshes, lagoons and fresh water estuaries and the Kiawah River, which connects with the Stono River and the Intracoastal Waterway, all together there are 65 ponds or lagoons on the Island.

The island has a maritime forest and there are 18 species of mammals including whitetail deer, raccoon, opossum and squirrel, and more than 30 species of reptiles and amphibians including alligators and sea turtles that inhabit the island.

Kiawah’s effort to protect the Atlantic Loggerhead Sea Turtle received national acclaim in 1981 when the Izaak Walton League honored Kiawah’s program with a National Conservation award. Kiawah’s environmental protection efforts also include the Kiawah Island Wildlife Committee whose purpose is to enhance and protect Kiawah’s wildlife and fish species and to promote education, understanding and enjoyment of the natural environment on Kiawah. There are more than 140 species of birds including the Brown Pelican, Wood Ibis, osprey, duck, sea gulls, terns, herons, hawks and egrets.